Before you go, check this out!

We have lots more on the site to show you. You've only seen one page. Check out this post which is one of the most popular of all time. 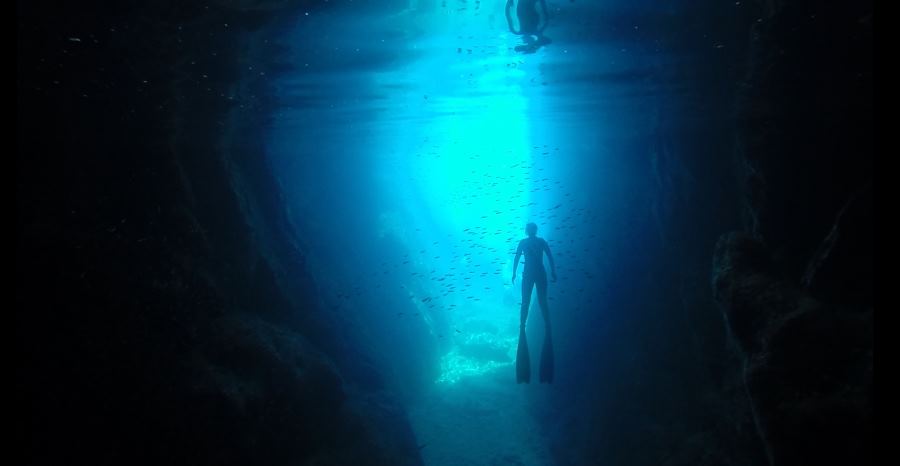 Any sane freediver or soon-to-be freediver will at some point wonder what the freediving death rate is among the sport. Next to base jumping, freediving ranks as one of the most dangerous extreme sports in the world.

And this shouldn’t come as a surprise either.

After all, freediving can be incredibly dangerous – especially if you don’t have the right gear. It’s a sport almost solely built around navigating the depths of the ocean on a single breath. Make any mistakes, miscalculations or push things too far…and you may never come up for another breath again.

So what is the actual freediving death rate?

The death rate in competitive freediving is roughly 1 death in every 50,000 competitive dives. As for recreational freediving, the number is much higher, sitting at about 1 in 500.

Competitive freediving carries with it the idea that it’s incredibly dangerous.

And at first glance it sure is. You’re going out of your way to push your body to its utmost limits in order to get to never-before reached depths.

And the entire time, your internal organs are getting battered by immense underwater pressure while your body frantically tries to conserve every last drop of oxygen until your resurface.

Despite this; competitive freediving has a surprisingly low death rate.

To date there have been more than 50,000 competitive freedives worldwide and there has only ever been one recorded death in a competition.

Now, 1 out of 50,000 dives is an incredibly low number. So how is this possible? How is the competitive freediving death rate so low?

Well, the competitive freediving death rate is so low, because these competitions are all held under AIDA (or equivalent) freediving authority.

Each time there is a freediving competition, certain safety rules must be followed. These rules make the sport surprisingly safe.

These are just some of the AIDA safety rules which keep the competitive freediving death rate so low.

Another reason competitive freediving has such a low death rate, is because of the type of person it attracts.

Think about the type of person who does competitive freediving.

They are not your usual recreational divers.

They in most cases have:

In summary: the competitive freediving death rate is so low because it attracts trained professionals. On top of this, each competition is carefully managed and monitored under strict safety guidelines.

Interestingly enough, the Australian Freediving Organisation noted that sports such as running, cycling and scuba diving have a higher death rate than competitive freediving.

So, does this mean freediving is a safe sport?

Not quite. You see, we’ve only looked at competitive freediving.

We haven’t covered the elephant in the room: the fact that majority of freedivers dive recreationally. In other words they don’t dive under strict AIDA supervision or guidelines.

Recreational freedivers are often those who dive just to see the beauty of the ocean or to take jaw-dropping, underwater pictures with their freediving cameras.

Other recreational freedivers dive to go spearfishing, while others do it for the meditative calm that comes from being in the underwater world.

In recreational freediving, many freedivers don’t go deeper than 8 – 10 meters. Most underwater life and coral worth seeing can be found in this region.

But despite the shallow dives common to recreational freediving; it carries with it a much higher death rate.

The above reasons are expected to account for majority of the freediving deaths you hear about and is why recreational freediving carries a much higher fatality rate.

So, what is the actual freediving death rate?

According to the Divers Alert Network (DAN) which analyzed freediving death rate data between 2006 and 2011, about 59 freedivers die each year.

Another interesting finding from DAN is that of the 447 cases of freediving accidents recorded in this time; 308 were fatal.

This means that if you have a freediving accident; there is a 75% chance that it is lethal. 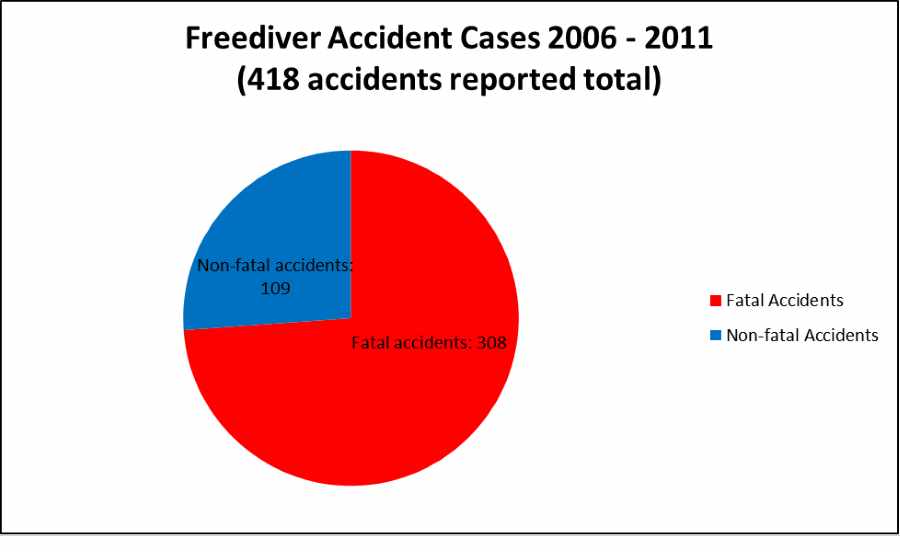 This may seem alarming at first, but it’s important to note that these statistics are based on what is self-reported by onlookers via the DAN website. There could be some bias at work here.

For example; if you have a friend or family member who died from freediving you are more likely to log onto a website and report it. But if that same family member had an accident and survived it, you probably wouldn’t report it.

DAN also claims that the most common age for death in freedivers is between 20 and 29 years old. Of this age bracket; roughly 90% are males and 10% are females.
And of all reported freediving accidents, it was found that most were in the ocean (90%). 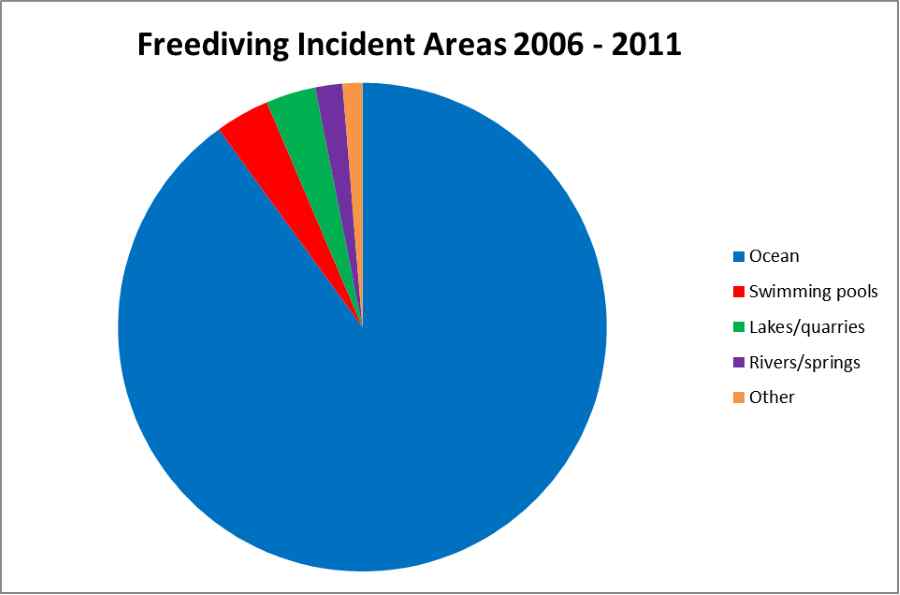 At this point you might be asking yourself “well, is freediving safe?”

As you can guess, the answer here is ‘it depends’.

However, to give a better answer, let’s look at what James Nestor, author of one of the most popular freediving books ever – ‘Deep’ – says about freediving death rates and safety:

Keep in mind the author preludes this statistic by saying the freediving death rate stats are a rough estimate.

The best answer I can give is that freediving is safe if you follow all the safety precautions closely.

For example if you dive with safety divers the sport is much, much safer.

The biggest issue with freediving death rate statistics is that they aren’t researched thoroughly. This is probably because the sport is quite new and not many people know about it.

Hopefully in the future, as more people start freediving, more research will be done into freediving death rates and injury prevention methods.

As is always the case, practice carefully. Use high-quality equipment, dive with a safety diver, never push yourself too far, do your daily lung training exercises and don’t assume you can hit the same depth each dive (your PB’s will differ day-to-day).

Famous freedivers who have died

There has only ever been a handful of professional freedivers who have passed away while diving.

Below are listed some famous freedivers who either pushed too hard when they shouldn’t have, died under mysterious circumstances or were just plain unlucky:

Nicholis Mevoli was a very talented Florida-based freediver. In the space of just over a year, Nicholis went from novice, to competing in reputable international freediving competitions.

Despite being new to the sport, Nicholis placed 2nd and 3rd in the Deja Blue and the Caribbean Cup comps.

In mid-November 2013, Nicholis competed in the Vertical Blue competition held in the Bahamas.

His goal was to dive to a depth of 72 meters (Constant Weight Without Fins) in Dean’s Blue Hole. The Blue Hole drops down to a terrifying depth of 202 meters deep, making it the second deepest known blue salt water hole ever.

Nicholis made it down 68 meters, began to ascend, then changed his mind pushing further down again. This was a huge violation of the AIDA competition safety regulations. Once you ascend you must keep going up.

After more than 3.5 minutes underwater, Nicholis resurfaced. He was awake and appeared perfectly fine. That was until he fell backwards into the water after losing consciousness. Nicholis eventually passed away from a pulmonary edema.

Audrey Mestre’s childhood was dominated by her natural ability to thrive in water-based environments. She quickly rose the ranks winning dozens of swimming awards and quickly mastering scuba diving by her mid-teens.

Audrey later dove into professional freediving and went on to hold the world female freediving record at a depth of 130 meters in the year 2001.

In 2002, her ever-ambitious attitude and natural obsession with the underwater achievement led Audrey to attempt a training dive to 171 meters below surface level. This dive was held near the Dominican Republic in the No limits freediving category.

After descending to a depth of 171 meters on a 91kg-weighted sled, Audrey came to the horrifying realization that her balloon was broken. This meant it failed to inflate, stopping her from ascending to the surface in time to breath again.

Safety divers found her body and rushed her to the surface using inflatable devices.

Audrey Mestre was given mouth-to-mouth resuscitation on the surface. Unfortunately it was too late, as she had already died from lack of oxygen.

Natalie Molchanova was, for the better part of her life, a professional swimmer. Nat competed in many tournaments and competitions nationally and globally from a young age.

Despite her achievements, Natalie’s swimming career came to a quick halt when she decided to have children. At age 40, Natalie made an incredible come-back to water sports. Except, this time, she came back to dominate the sport of freediving. Natalie went on to hold an astounding 41 freediving world records, with 23 gold medals.

Toward the end of her career, Natalie was said to have been one of the best freedivers ever. She was even able to beat some of the male freediving world records.

At August 2, 2015, Natalie gave a private lesson near Ibiza, Spain. After going down to a depth of 40 meters, Natalie never resurfaced again.

Mysteriously enough; the world-champion freediver and former professional swimmer was presumed to have been swept away by underwater currents.

A search party was launched but her body was never found.

Loic was a French freediver, previous world-record holder and also the founder of the AIDA in 1990 with two others.

At the age of 36, Loic was training off of the South-Eastern coast of France in the No Limits Apnea category. His previously held record was broken shortly before his training session, fueling his determination to push his own limits and descend deeper and deeper into the French waters.

After mounting his weighted sled, and rapidly descending into the dark depths of ocean, Loic attemped resurface. But when he tried to inflate his air balloon, he realized it had malfunctioned.

Shortly after he drowned.

Loic’s unfortunate death cast a dark shadow over the sport for years. But his legacy – AIDA – lives on.

Loic is still to this day regarded among the freediving community for being a pioneer in the freediving world. His safe and level-headed approach to the sport and his daring ability to endlessly reach new freediving records will never be forgotten.

When you dive using a high quality freediving mask, you'll feel the difference. Each year, countless freedivers spend their hard-earned money on the wrong type of freediving masks. Usually these...

The information written on this website is not medical advice, nor has it been endorsed by medical health professional(s). All content on this site is for informational purposes only. Links to products may contain affiliate links. If you make a purchase after clicking a link, we may receive a commission. This commission comes at no extra charge to you.